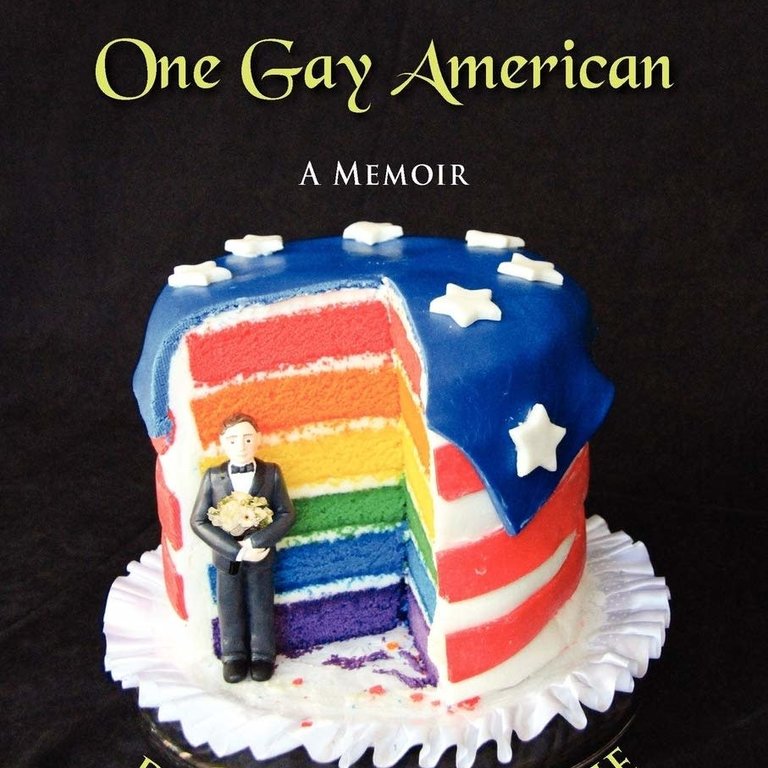 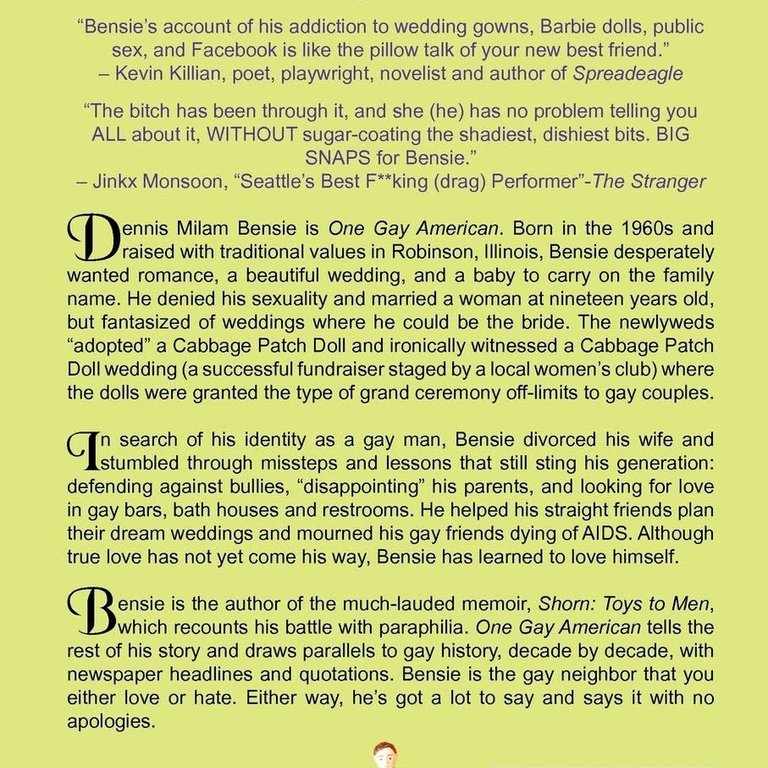 $13.00
Independent
In stock
One Gay American: A memoir By Dennis Milam Bensie
Share this product:

One Gay American: A memoir
By Dennis Milam Bensie

Dennis Milam Bensie is One Gay American. Born in the 1960s and raised with traditional values in Robinson, Illinois, Bensie desperately wanted romance, a beautiful wedding, and a baby to carry on the family name. He denied his sexuality and married a woman at nineteen years old,  but fantasized of weddings where he could be the bride. The newlyweds "adopted" a Cabbage Patch Doll and ironically witnessed a Cabbage Patch Doll wedding (a successful fundraiser staged by a local women's club) where the dolls were granted the type of grand ceremony off-limits to gay couples.

In search of his identity as a gay man, Bensie divorced his wife and stumbled through missteps and lessons that still sting his generation: defending against bullies, "disappointing" his parents, and looking for love in gay bars, bath houses and restrooms. He helped his straight friends plan their dream weddings and mourned his gay friends dying of AIDS.

Although true love has not yet come his way, Bensie has learned to love himself. Bensie is the author of the much-lauded memoir, Shorn: Toys to Men, which recounts his battle with paraphilia. One Gay American tells the rest of his story and draws parallels to gay history, decade by decade, with newspaper headlines and quotations. Bensie is the gay neighbor that you either love or hate. Either way, he's got a lot to say and says it with no apologies.

One Gay American was a finalist in the 2013 Indie Excellence Awards. It was also a finalist, along with his first memoir, Shorn: Toys to Men in the 2013 Next Generation Indie Book Awards.

Dennis Milam Bensie grew up in Robinson, Illinois where his interest in the arts began in high school participating in various community theatre productions. He holds a degree in Theater Costume Design from Southern Illinois University at Carbondale and completed an apprenticeship in theatrical wig construction at Los Angeles Opera. His costume and wig design for Valley of the Dolls at Empty Space Theatre in Seattle garnered him a feature article in Entertainment Design Magazine and a Seattle Times Footlight Award for Best Design. Bensie was the Wardrobe and Wig Master at Intiman Theatre in Seattle for twenty seasons. His first book, Shorn: Toys to Men was nominated for the Stonewall Book Award, sponsored by the American Library Association. It was also a pick in the international gay magazine The Advocate as One of the Best Overlooked Books of 2011. Dennis is single and lives in Seattle with his three dogs.